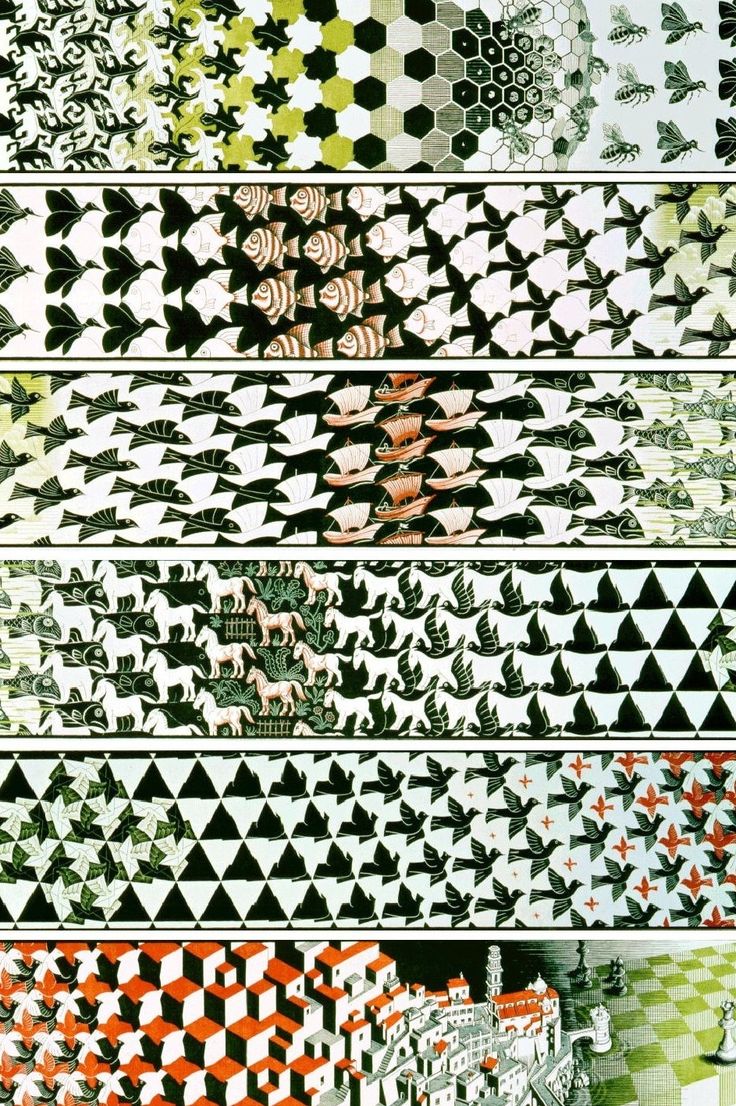 Möbius Trip. The Technosphere and Our Science Fiction Reality

In his feverish essay concerning the role of these efficient, yet paltry, energy distribution devices called humans, science writer Dorion Sagan exits the Anthropocene in pursuit of epochs, evolutionary constellations and thermodynamic possibilities beyond consensus models. A tireless and curious exploration about the trip that humanity is on.
Dorion Sagan
November 15, 2016
We are stardust We are golden And we’ve got to get ourselves Back to the garden. -Joni Mitchell (1969) When the failure of this business as usual [. . .]. It will be claimed that there is no choice but to try and tame Gaia. Geoengineering will be presented as a logical accomplishment in the great history of human emancipation and mastery and those who resist will be accused of betraying our destiny. The script is already written. -Isabelle Stengers (2014) Some persons fancy that bias and counter-bias are favorable to the extraction of truth—that hot and partisan debate is the way to investigate. This is the theory of our atrocious legal procedure. But logic puts its heel upon this suggestion. It irrefragably demonstrates that knowledge can only be furthered by the real desire for it, and that the methods of obstinacy, of authority, and every mode of trying to reach a foregone conclusion, are absolutely of no value. -C. S. Peirce (1878) 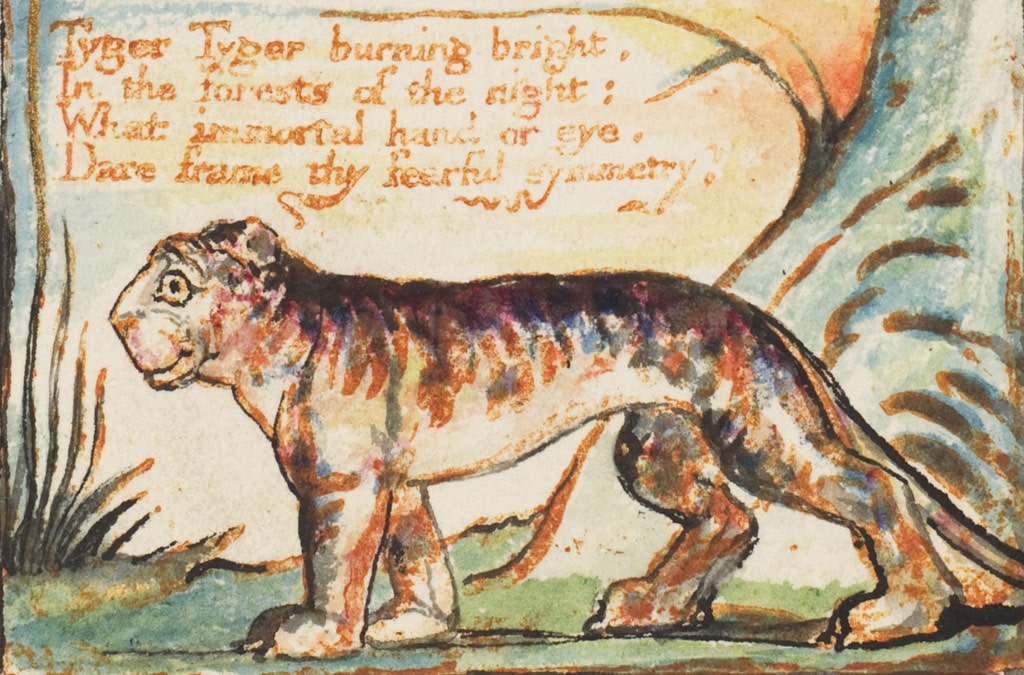 large
align-left
align-right
delete
William Blake ca. 1795. Source: Wiki Art
“Tiger Tyger burning bright in the forests of the night what immortal hand or eye could frame thy fearful symmetry?” The answer to Blake’s tiger, a more Vedic version of Schrödinger’s Cat, is you, I—the double-eyed creature that reads these words and shares a lineage with felines. As the poetic image of the eye, be it the personal world, allied to dream for Heraclitus, the “idios kosmos,” different for each of us humans, or the same cloud-flecked blue eye of Earth blinking or winking in the high depths, the deep heights, perhaps endless, of space — : as the poetic image of the eye/I suggests, all is not necessarily as it seems. The self is in such scientific flux—we are cell colonies, we are animals, we are parts of global technic empires; we are parts of Earth history, of a recently appeared geological veneer popularly now called the Anthropocene. When we die now, we may become ghosts, digital images preserved, say on YouTube or Facebook as traces, in the emerging memory of the technosphere. In continuous existence, we, as life, might regard even our current identities as mere patterns or place savers among vast, perhaps eternal and infinite, forces. Reality, as usual, remains more surreal than the most forward-looking science fiction. “The Earth has skin diseases,” Nietzsche’s strange prophet Zarathustra says, “one of which is Man."Friedrich Nietzsche, Also Sprach Zarathustra. Chemnitz: Schmeitzner, 1883, section 40, “Great Events”: “Die Erde, sagte er, hat eine Haut; und diese Haut hat Krankheiten. Eine dieser Krankheiten heisst zum Beispiel: ‘Mensch.’” [“The earth, said he, hath a skin; and this skin hath diseases. One of these diseases, for example, is called ‘man.’”] The more usual “quote” that, “The Earth is beautiful but has a (skin) disease called man,” appears to be an apocryphal pebble, albeit polished by time. 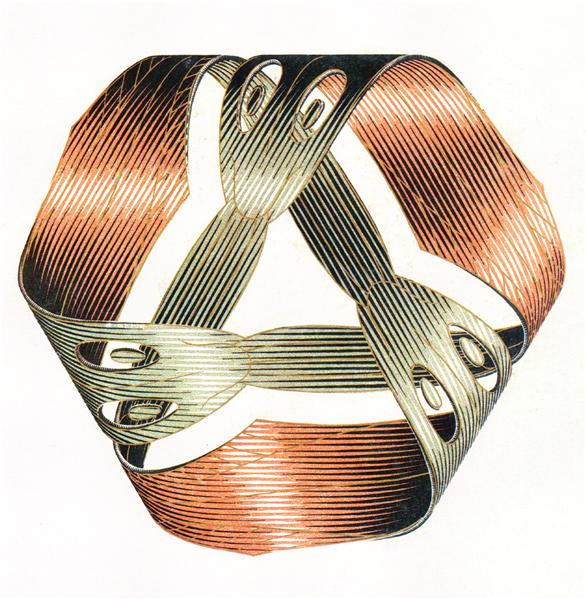 large
align-left
align-right
delete
M. C. Escher 1963. Source: Wiki Art
But whereas Columbus underestimated his circular trip, our seemingly forward, finalistic ecological-evolutionary progress may in fact be more of a circular voyage. Our present situation with regard to ecology and evolution is a kind of funhouse mirror image of Columbus’s roundabout route. We are not the first sort of organism to cause mass extinctions. Our effect on the atmosphere is orders of magnitude less impressive than that of previous life-forms, the cyanobacteria. Indeed, the changes that accrued from their growth and pollution (specifically oxygen gas) was a key condition for the possibility of our existence and evolution. And, while previous organisms have never created a global electromagnetic communications network, we are hardly the first species whose populations have moved from being solitary individuals to increasingly connected forms. “The past,” Shakespeare said, “is prologue.” Columbus knew he was headed back, but the premature conclusion of a complete circumnavigation led to the confused discovery of a “New” World. In our case, we make a similar but opposite mistake, in the realm of temporality rather than spatiality. We think we are moving linearly into a never-before-seen future when, in reality, we may be repeating a variation of an ancient ecological tune. 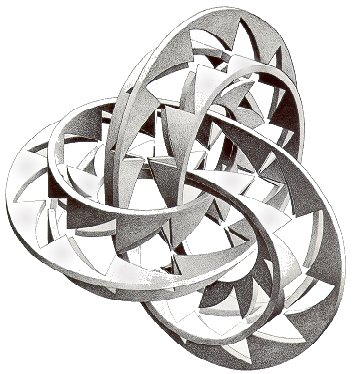