In this brief statement excerpted from a conversation about Southeast Asian urbanism and geology, philosopher Etienne Turpin sketches the root problematics faced by the city of Jakarta as exemplified by its land and sea interfaces.
Etienne Turpin
anexact office and Massachusetts Institute of Technology
April 15, 2017 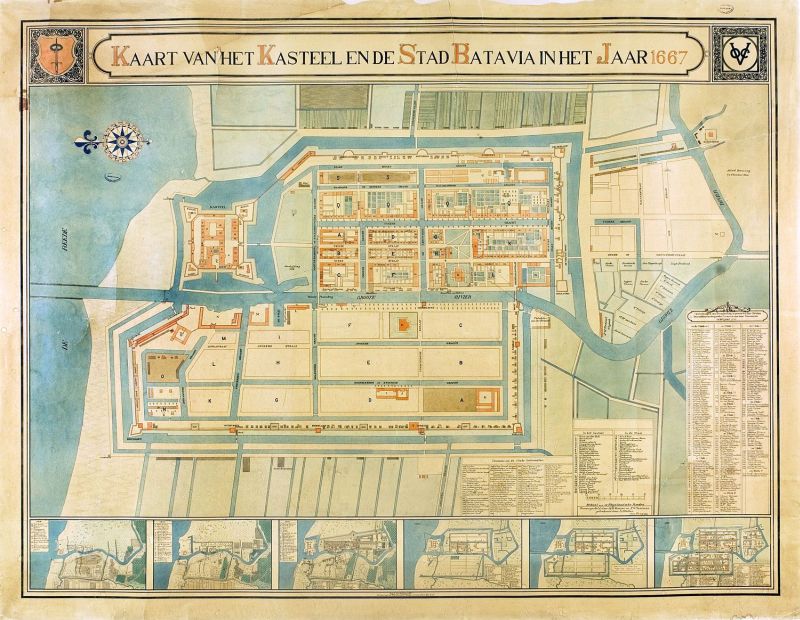 large
align-left
align-right
delete
Map of Batavia after Specx completion of the city wall. Source: Wiki Commons
We could say that we have something of a geological curse beneath us in Jakarta, which in a way is like many other Asian delta cities—of course, not all of these other cities were colonial settlements, but Batavia certainly was. What kind of Holocene fantasy was in the mind of the Dutch when they moved into a pestilential, mosquito-filled mangrove swamp and decided to show their manly engineering brilliance by turning it into a capital city? I mean it’s completely absurd. But now we’re stuck there, all 31 million residents who are now living among the thirteen rivers that run from the mountains to the sea through this sprawling megacity. And we’re stuck with the 1,100 kilometers of canals the Dutch decided to cut through the landscape. We’re stuck because Indonesians can’t just decide that—after the Dutch made this swamp into an extremely costly colonial investment over the course of a hundreds of years—to just call it off, and instead move to some different place. We have to remember that these colonial path dependencies are really about the control of nature. People from Europe look at Indonesia today and say: “Wow, this is totally fucked. There’s been a city there for over three hundred years, but they still can’t get it together to stop the flooding.” Instead of such admonishing neocolonial judgments—which you can still hear spoken every day in Holland, by the way—we should ask why the flood plain was destroyed and who profited from it? Who channelized the rivers? Who tried to confine the tropical monsoon with European hydraulics? And, now, how can we work to decolonize not only the state, but these natural systems too, which can no longer be what they are because the Dutch built their colony as some water-management fantasy-park experiment in which we are all now condemned to live?
This statement is an edited excerpt of a longer conversation between Etienne Turpin and Simon Price on Stratigraphy and Urbanism held during the A Matter Theater event at HKW, Berlin, October 18, 2014.